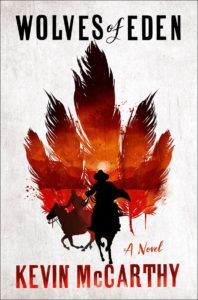 The Civil War may be over, but in this thrilling historical novel, the battle for the West is only just beginning.

wolves of eden  – Dakota Territory, 1866. Following the murders of a frontier fort’s politically connected sutler and his wife in their illicit off-post brothel, Lieutenant Martin Molloy and his long-suffering orderly, Corporal Daniel Kohn, are ordered to track down the killers and return with “boots for the gallows” to appease powerful figures in Washington. The men journey west to the distant outpost in a beautiful valley, where the soldiers inside the fort prove to be violently opposed to their investigations.

Meanwhile, Irish immigrant brothers Michael and Thomas O’Driscoll have returned from the brutal front lines of the Civil War. Unable to adapt to life as migrant farm laborers in peacetime Ohio, they reenlist in the army and are shipped to Fort Phil Kearny in the heart of the Powder River Valley. Here they are thrown into merciless combat with Red Cloud’s coalition of Native tribes fighting American expansion into their hunting grounds. Amidst the daily carnage, Thomas finds a love that will lead to a moment of violence as brutal as any they have witnessed in battle—a moment that will change their lives forever.

Blending intimate historical detail and emotional acuity, Wolves of Eden sets these four men on a deadly collision course in a haunting narrative that explores the cruelty of warfare and the resilience of the human spirit

Kevin McCarthy is the author of Peeler (Mercier, 2010), an historical crime novel set during the War of Independence in Ireland. His short fiction has appeared in many journals both in print and on the web and his story, Twenty-five and Out, appears in Down These Green Streets: Irish Crime Writing in the 21st Century (Liberties, 2011). He was born in Suffolk, UK, where his father was stationed with the US Air Force. He served in the Air Force himself before studying at Boston College and University College Dublin. In 2005 he was awarded the Fingal County Council Arts Bursary for Fiction Writing.

You can get the audio book through Amazon Audible Free Trial