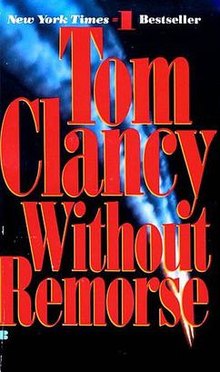 Without Remorse is a thriller novel, written by Tom Clancy and published on August 11, 1993. Set during the Vietnam War, it serves as an origin story of John Clark, one of the recurring characters in the Jack Ryan universe. Without Remorse introduces Clark as former Navy SEAL John Kelly, and explains how he changed his name. The book debuted at number one on the New York Times bestseller list

John Kelly, former Navy SEAL and Vietnam veteran, is still getting over the accidental death of his wife six months before, when he befriends a young woman with a decidedly checkered past. When that past reaches out for her in a particularly horrifying fashion, he vows revenge and, assembling all of his old skills, sets out to track down the men responsible, before it can happen again.

At the same time, the Pentagon is readying an operation to rescue a key group of prisoners in a North Vietnamese prisoner-of-war camp. One man, they find, knows the terrain around the camp better than anyone else they have: a certain former Navy SEAL named John Kelly.

Kelly has his own mission. The Pentagon wants him for theirs. Attempting to juggle the two, Kelly (now code-named Mr. Clark) finds himself confronted by a vast array of enemies, both at home and abroad – men so skillful that the slightest misstep means death. And the fate of dozens of people, including Kelly himself, rests on his making sure that misstep never happens.

Men aren’t born dangerous. They grow dangerous. And the most dangerous of all, Kelly learns, are the ones you least expect…
As Clancy takes us through the twists and turns of Without Remorse, he blends the exceptional realism and authenticity that are his hallmarks with intricate plotting, knife-edge suspense and a remarkable cast of characters.

Tom Clancy was an English major at Baltimore’s Loyola College. As a Maryland insurance broker with a passion for naval history, his dream of writing a novel came true with his first effort, The Hunt for Red October (1984).

He since wrote more than a dozen novels, which have a blend of realism and authenticity, intricate plotting, and razor-sharp suspense. Ten of the novels, including The Teeth of the Tiger(Berkley, 2004), feature the character Jack Ryan, former stock broker and CIA employee.

He lived in Maryland.