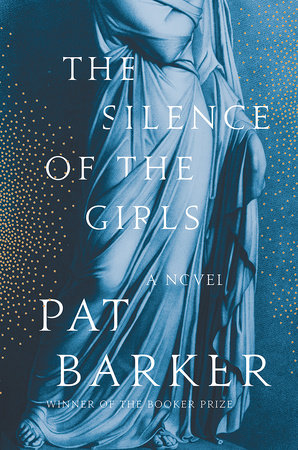 From the Booker Prize-winning author of the Regeneration trilogy comes a monumental new masterpiece, set in the midst of literature’s most famous war. Pat Barker turns her attention to the timeless legend of The Iliad, as experienced by the captured women living in the Greek camp in the final weeks of the Trojan War.

The Silence of the Girls – The ancient city of Troy has withstood a decade under siege of the powerful Greek army, who continue to wage bloody war over a stolen woman—Helen. In the Greek camp, another woman watches and waits for the war’s outcome: Briseis. She was queen of one of Troy’s neighboring kingdoms, until Achilles, Greece’s greatest warrior, sacked her city and murdered her husband and brothers. Briseis becomes Achilles’s concubine, a prize of battle, and must adjust quickly in order to survive a radically different life, as one of the many conquered women who serve the Greek army.

When Agamemnon, the brutal political leader of the Greek forces, demands Briseis for himself, she finds herself caught between the two most powerful of the Greeks. Achilles refuses to fight in protest, and the Greeks begin to lose ground to their Trojan opponents. Keenly observant and cooly unflinching about the daily horrors of war, Briseis finds herself in an unprecedented position to observe the two men driving the Greek forces in what will become their final confrontation, deciding the fate, not only of Briseis’s people, but also of the ancient world at large.

Briseis is just one among thousands of women living behind the scenes in this war—the slaves and prostitutes, the nurses, the women who lay out the dead—all of them erased by history. With breathtaking historical detail and luminous prose, Pat Barker brings the teeming world of the Greek camp to vivid life. She offers nuanced, complex portraits of characters and stories familiar from mythology, which, seen from Briseis’s perspective, are rife with newfound revelations. Barker’s latest builds on her decades-long study of war and its impact on individual lives—and it is nothing short of magnificent.

Read fear: Trump in the white house by Bob Woodward

Emily May rated it liked it

“Great Achilles. Brilliant Achilles, shining Achilles, godlike Achilles . . . How the epithets pile up.
We never called him any of those things; we called him ‘the butcher’.”

The Silence of the Girls is a retelling of Homer’s The Iliad that brings in the stories of the women and girls who were, essentially, collateral damage in the Trojan War.

Briseis is the narrator. When Lyrnessus falls to the Greeks, she becomes a war prize for Achilles but quickly gets caught up in a dispute between him and Agamemnon. We experience life in the Greek’s camp through her eyes and see all the injustices that take place. Barker’s frank, gritty portrayal of a place swamped in stinking rats, alcohol and male ego is especially good in the first half of the book.

Whether intentional or not, the title calls to mind Clarice Starling from The Silence of the Lambs and her story about helplessly sitting by while the lambs went to the slaughter. It’s an interesting parallel. Briseis recounts the atrocities of war and how they affect women, unable to help the women around her as they are abused, raped and traded like chattel. It’s a dark story, to be sure, and I found it very emotional and effective for just less than half of the book.

She was like a windflower trembling on its slender stem, so fragile you feel it can’t possibly survive the blasts that shake it, though it survives them all.

I wanted to give it a higher rating, but I can’t shake the impression that The Silence of the Girls offers a fascinating premise and then kinda doesn’t know what to do with it. The strong start becomes something tedious and repetitive once we settle into camp life, and especially so when the author introduces Achilles’ perspective in the second half. It’s disappointing when books are strong in concept but quickly wither out in execution.

I’m probably underselling it, though. 3 stars is not really a negative rating and there’s some excellent writing here. Achilles is a complex character, portrayed both through his own perspective and through Briseis’s. His maternal abandonment issues, plus his relationship with Patroclus, are told well. It is strange perhaps that in a book called The Silence of the Girls, Achilles is still the most interesting and multilayered character. Or maybe that’s the point- who knows?

Barker’s writing is mostly smart and witty, powered both by metaphor and some of Briseis’s sardonic asides, but there are a few jarring anachronisms. Her use of British slang like “knockers” for breasts feels weird and out of place no matter how much the author assures us it was intentional.

It’s really difficult to talk about this retelling of Greek mythology without bringing in Madeline Miller as a comparison. Well, I liked this one better than Miller’s The Song of Achilles but less than her Circe. As far as books that give voices to the lesser-known women of ancient myths go, Circe still comes out on top for me.

Pat Barker was born in Thornaby-on-Tees in 1943. She was educated at the London School of Economics and has been a teacher of history and politics.