Free Novels online The Reckoning by John Grisham : A Novel 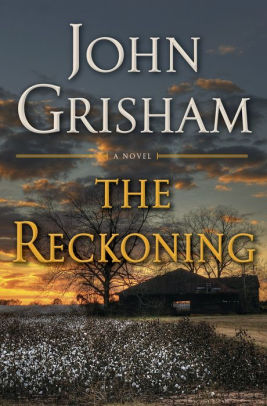 John Grisham’s The Reckoning is the master storyteller’s most powerful, surprising, and accomplished novel yet
The Reckoning by John Grisham – The story takes place in the fictional town of Clanton, Mississippi, in Grisham’s Ford County. It is the sixth Grisham novel to take place here, following A Time to Kill, The Summons, The Chamber, The Last Juror, and Sycamore Row.

Pete Banning was Clanton, Mississippi’s favorite son–a decorated World War II hero, the patriarch of a prominent family, a farmer, father, neighbor, and a faithful member of the Methodist church. Then one cool October morning he rose early, drove into town, walked into the church, and calmly shot and killed his pastor and friend, the Reverend Dexter Bell. As if the murder weren’t shocking enough, it was even more baffling that Pete’s only statement about it–to the sheriff, to his lawyers, to the judge, to the jury, and to his family–was: “I have nothing to say.” He was not afraid of death and was willing to take his motive to the grave.

In a major novel unlike anything he has written before, John Grisham takes us on an incredible journey, from the Jim Crow South to the jungles of the Philippines during World War II; from an insane asylum filled with secrets to the Clanton courtroom where Pete’s defense attorney tries desperately to save him.
Reminiscent of the finest tradition of Southern Gothic storytelling, The Reckoning would not be complete without Grisham’s signature layers of legal suspense, and he delivers on every page.

The plot centers around the 1946 murder trial of prominent family patriarch Pete Banning, a war hero who has returned home from the Second World War.

The story takes place in the fictional town of Clanton, Mississippi, in Grisham’s Ford County. It is the sixth Grisham novel to take place here, following A Time to Kill, The Summons, The Chamber, The Last Juror, and Sycamore Row.

Pete Banning comes from a family that has farmed cotton for generations. He is owner of a 640-acre parcel in northern Mississippi. His wife Liza has recently been placed in a mental institution. His children Joel and Stella are college students. His sister Florry is a would-be writer who lives on an adjacent parcel.

One morning, Pete rises and decides that today is the day for an act of killing. He goes about his normal activities before heading into town, where he walks in on Dexter Bell, the pastor of the local Methodist church, and pulls out a gun. The pastor exclaims, “If it’s about Liza, I can explain.” Pete shoots three times, killing Bell.

Pete makes no secret of what he has done. The town is aghast. Sheriff Nix Gridley drives out to the Banning farm, arrests Pete, and jails him. To all inquiries about his actions, Pete replies, “I have nothing to say.” His children are instructed to stay away from Clanton. The pastor’s widow, Jackie Bell, returns with her three children to her parents in Georgia.

After some internal friction, a grand jury returns an indictment of first degree murder. Banning family attorney John Wilbanks attempts to construct a defense but Pete refuses to allow a request for change of venue nor preparation for a plea of temporary insanity.

“Long before his name became synonymous with the modern legal thriller, he was working 60-70 hours a week at a small Southaven, Mississippi law practice, squeezing in time before going to the office and during courtroom recesses to work on his hobby—writing his first novel.

Born on February 8, 1955 in Jonesboro, Arkansas, to a construction worker and a homemaker, John Grisham as a child dreamed of being a professional baseball player. Realizing he didn’t have the right stuff for a pro career, he shifted gears and majored in accounting at Mississippi State University.

After graduating from law school at Ole Miss in 1981, he went on to practice law for nearly a decade in Southaven, specializing in criminal defense and personal injury litigation. In 1983, he was elected to the state House of Representatives and served until 1990.

One day at the DeSoto County courthouse, Grisham overheard the harrowing testimony of a twelve-year-old rape victim and was inspired to start a novel exploring what would have happened if the girl’s father had murdered her assailants. Getting up at 5 a.m. every day to get in several hours of writing time before heading off to work, Grisham spent three years on A Time to Kill and finished it in 1987.

Initially rejected by many publishers, it was eventually bought by Wynwood Press, who gave it a modest 5,000 copy printing and published it in June 1988.

That might have put an end to Grisham’s hobby. However, he had already begun his next book, and it would quickly turn that hobby into a new full-time career—and spark one of publishing’s greatest success stories. The day after Grisham completed A Time to Kill, he began work on another novel, the story of a hotshot young attorney lured to an apparently perfect law firm that was not what it appeared.

When he sold the film rights to The Firm to Paramount Pictures for $600,000, Grisham suddenly became a hot property among publishers, and book rights were bought by Doubleday. Spending 47 weeks on The New York Times bestseller list, The Firm became the bestselling novel of 1991.

The successes of The Pelican Brief, which hit number one on the New York Times bestseller list, and The Client, which debuted at number one, confirmed Grisham’s reputation as the master of the legal thriller. Grisham’s success even renewed interest in A Time to Kill, which was republished in hardcover by Doubleday and then in paperback by Dell. This time around, it was a bestseller.

Since first publishing A Time to Kill in 1988, Grisham has written one novel a year (his other books are The Firm, The Pelican Brief, The Client, The Chamber, The Rainmaker, The Runaway Jury, The Partner, The Street Lawyer, The Testament, The Brethren, A Painted House, Skipping Christmas, The Summons, The King of Torts, Bleachers, The Last Juror, and The Broker) and all of them have become international bestsellers.

There are currently over 225 million John Grisham books in print worldwide, which have been translated into 29 languages. Nine of his novels have been turned into films (The Firm, The Pelican Brief, The Client, A Time to Kill, The Rainmaker, The Chamber, A Painted House, The Runaway Jury, and Skipping Christmas), as was an original screenplay, The Gingerbread Man. The Innocent Man (October 2006) marks his first foray into non-fiction.

Grisham lives with his wife Renee and their two children Ty and Shea. The family splits their time between their Victorian home on a farm in Mississippi and a plantation near Charlottesville, VA.

Grisham took time off from writing for several months in 1996 to return, after a five-year hiatus, to the courtroom. He was honoring a commitment made before he had retired from the law to become a full-time writer: representing the family of a railroad brakeman killed when he was pinned between two cars.

Preparing his case with the same passion and dedication as his books’ protagonists, Grisham successfully argued his clients’ case, earning them a jur

Originally published: 23 October 2018
Author: John Grisham
Page count: 480
Genre: Legal thriller
Publisher: Penguin Random House
Preceded by: The Rooster Bar
ISBN: 9780385544153
[besclwpbutton url=”https://www.amazon.com/Reckoning-Novel-John-Grisham/dp/0385544154/ref=zg_bsnr_books_7?_encoding=UTF8&psc=1&refRID=243TC5GHA9MFWJ91BFBG” newtab=”yes” besclwpbuttonstyle=”large”]GET ON AMAZON[/besclwpbutton]
Do you find any book interesting? Please Login and write a review on the book and it will be published as your work