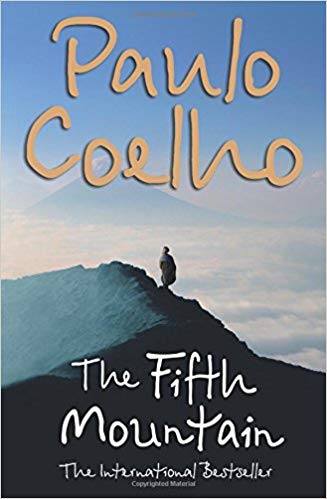 The Fifth Mountain by Paulo Coelho

Immerse yourself in an electrifying reading experience like no other — international bestselling author Paulo Coelho’s “The Fifth Mountain.” A stunning novel in the tradition of the highly acclaimed “The Alchemist, ” this is Coelho’s daring retelling of the prophet Elijah.

During the chaos of the ninth century B.C., Jezebel, wife to Israel’s ruler, orders the execution of all prophets who refuse to worship the pagan god Baal. The young prophet Elijah, commanded by an angel of God to flee Israel, seeks safety in the land of Zarephath, where he unexpectedly finds true love with a young widow.

But this new-found rapture is to be cut short, and Elijah sees all of his hopes and dreams irrevocably erased. What follows is sure to be viewed as Coelho’s literary milestone: the quietly moving account of a man touched by the hand of God who must triumph over his frustrations in a soul-shattering trial of faith.Inspired by a circumstance that forever altered Coelho’s own life, “The Fifth Mountain” is a testament to the truth that tragedy in life should not be considered a punishment but a challenge of the spirit. Gorgeous in its narrative and unforgettable in its prose, “The Fifth Mountain” teaches without being sanctimonious. This is a timeless story for the ages, a tale of the past that resonates powerfully for today’s readers

The story is based on the account of Elijah from the Hebrew Bible (1 Kings chapters 17-19). The focus is on Elijah’s time in Zarephath(in this book named Akbar). Much has been added to the simple Bible story by Coelho, including Elijah witnessing the sacking of Akbar by the Assyrians, Elijah’s journey up the Fifth Mountain itself (said to be the dwelling place of Baal), and Elijah’s falling in love with the widow to whom God sent him.

For a considerable portion of the story Elijah is very compliant, obeying everything God’s angels say. Eventually he realizes that his destiny is not being chosen by him but by God and ultimately he decides to abide by his own desires and will

Paulo Coelho was born in Rio de Janeiro, Brazil on August 24, 1947. As a teenager, he wanted to become a writer, but his parents wanted him to pursue a more substantial and secure career. At the age of 17, his introversion and opposition to his parents led them to commit him to a mental institution.

He escaped three times before being released at the age of 20. Once released, he abandoned his ideas of becoming a writer and enrolled in law school to please his parents. He stayed in law school for one year. In 1986, Coelho walked the 500-plus mile Road of Santiago de Compostela in northwestern Spain, a turning point in his life. On the path, he had a spiritual awakening, which he described in his book The Pilgrimage.

Before becoming a full-time author, he worked as theatre director and actor, lyricist, and journalist. He wrote song lyrics for many famous performers in Brazilian music including Elis Regina, Rita Lee, and Raul Seixas.

His first book, Hell Archives, was published in 1982. He has written over 25 books since then including The Alchemist, Brida, The Fifth Mountain, The Devil and Miss Prym, Eleven Minutes, The Zahir, The Witch of Portobello, Like a Flowing River, and Adultery. He received numerous awards including Las Pergolas Prize, The Budapest Prize, Nielsen Gold Book Award, and the Grand Prix Litteraire Elle. In 1996, he founded the Paulo Coelho Institute, which provides aid to children and elderly people with financial problems. In 2007, Coelho was named a Messenger of Peace to the United Nations.