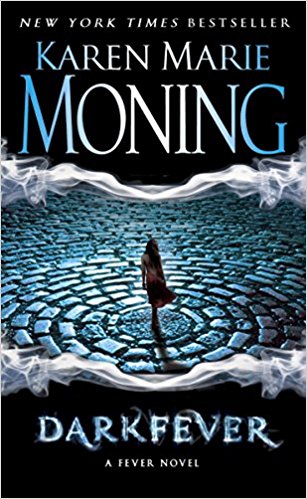 Darkfever by Karen Marie Moning – “My name is MacKayla, Mac for short. I’m a sidhe-seer, one who sees the Fae, a fact I accepted only recently and very reluctantly.

My philosophy is pretty simple – any day nobody’s trying to kill me is a good day in my book. I haven’t had many good days lately. Not since the walls between Man and Fae came down. But then, there’s not a sidhe-seer alive who’s had a good day since then.”

Darkfever is the first novel in the Fever series written by #1 New York Times best-selling American author Karen Marie Moning. The book was published in November 2006 by Delacorte Press. The romantic fantasy novel tells the story of the main characters journey into the supernatural world of fairies after she travels across the world to find her sisters murderer. The story is set in Dublin, Irelandand involves Celtic mythology

Download Pride and Prejudice by Jane Austen
When MacKayla’s sister was murdered, she left a single clue to her death, a cryptic message on Mac’s cell phone. Journeying to Ireland in search of answers, Mac is soon faced with an even greater challenge: staying alive long enough to master a power she had no idea she possessed – a gift that allows her to see beyond the world of man, into the dangerous realm of the Fae.As Mac delves deeper into the mystery of her sister’s death, her every move is shadowed by the dark, mysterious Jericho…while at the same time, the ruthless V’lane – an alpha Fae who makes sex an addiction for human women – closes in on her. As the boundary between worlds begins to crumble, Mac’s true mission becomes clear: to find the elusive Sinsar Dubh before someone else claims the all-powerful Dark Book – because whoever gets to it first holds nothing less than complete control both worlds in their hands.

The novel tells the story of MacKayla Lane or “Mac”, the daughter of Jack and Rainey Lane who works as a bartender in Georgia and lives a completely normal life. After learning about her sister’s death MacKayla travels to Ireland in hopes of finding her sister’s murderer when the local police determine the case unsolved. Soon after arriving in Ireland Mac is spending the evening in a local pub when she sees an inhumanly beautiful man.

As she is staring her vision started to change and she saw a man in decay with a foul odor, which she learns to be the Gray Man preying on a victim. No one else noticed the sight except an elderly woman who startles her by hitting her in the head and telling her not to stare because that she would jeopardize them all.

The old woman continues to call Mac an O’Connor which she does not understand. Days later Mac visits a local store by the name of Barrons Books and Baubles where she meets a mysterious man by the name of Jerricho Z. Barrons who informs her of a supernatural world of fairies and the oncoming and unknown-to-human war between the Fae world and Mankind. He also teaches MacKayla that she is a sidhe-seer along with her sister.

He tells Mac that the Fae world caused her sister’s death after she fell in love with one of the Fae who was using Mac’s sister in his search for the Sinsar Dubh (pronounced shee-shu-doo), a Dark Hallow authored by the Dark King of the unseelie that belonged to the fae court which is said to hold all the deadliest magic in its pages