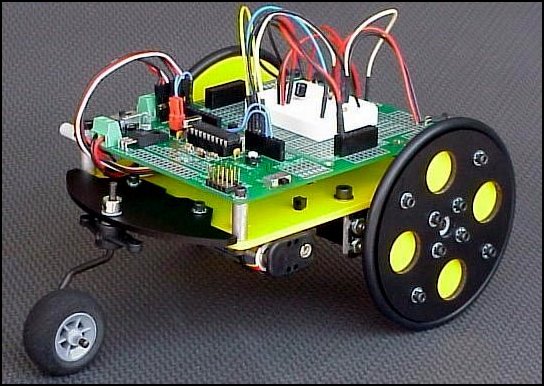 MICROCONTROLLER BASED INDUSTRIAL FAULT MONITORING SYSTEM: It will check the faults like over temperature, humidity, power failure, over voltage etc. at the monitor. One can link this with RF data encoders/decoder for wireless link.

MICROCONTROLLER BASED RFID ATTENDENCE MONITOR: The project will show the names of person who had pressed the RFID key on LCD. One can use DATA encoder/decoder circuit.

MICROCONTROLLER BASED FREQUENCY COUNTER USING LCD: The project will check the unknown frequency input up to 200KHz. and display at LCD.

MICROCONTROLLER   BASED LINE FOLLOWER ROBOT: A Robotic car that follows the black line at the floor area based on IR sensors with transmitters and receivers. With options like: (a) mines/metal detector with auto brake (b) IR sensor with auto braking at front.

MICROCONTROLLER   BASED FOUR DIGIT CODE LOCK WITH LCD DISPLAY: One can lock the desired device with the help of this project. It will open with a selected four digit code.

The project reads the motor speed on any ac/dc motor at four seven segment displays using IR technique. The project also comprises a dc motor speed controller circuit to change the speed of motor with a variable control.

MICROCONTROLLER   BASED ALARM CLOCK: The unit display the time in Hr. Min. and one can set the alarm also for a desired time at seven segment display.

MICROCONTROLLER   BASED INDUCTANCE METER: It is to measure inductance value based on the technique of time of charging an inductor. It can measure values ranging from 1mH to 5H.

MICROCONTROLLER BASED CONDUCTIVITY METER (ACID/BASE): The project will check the conductivity level of a liquid and read it at LCD.

MICROCONTROLLER BASED PH METER: Likewise the above it will check the PH value for acid and basis.

MICROCONTROLLER BASED SMOKE DETECTOR FOR POLLUTION CHECKING: It will check the smoke particulates in an area or carbon particles deposited on a surface.

MICROCONTROLLER BASED ALCOHOL SENSOR -ELECTRONIC NOSE: The project is quite unique that check the change in reading from one level to other if senses the presence of Alcohol. Useful for police to check car/truck drivers.

MICROCONTROLLER BASED HUMIDITY CHECKER/HYGROMETER: It will check the relative humidity in atmosphere using humidity sensor.

MICROCONTROLLER BASED TEMPERATURE METER: It will check the real time temperature at the sensor and displays it on an LCD.

MICROCONTROLLER BASED SECURED ROOM ACCESS WITH RELAY DOOR WITH OPTION TO CHANGE THE PASSWARD: This is an access control system in which one can open the door/ control a device motor with the help of a specific code and anytime one can change this to save in system memory.

MICROCONTROLLER BASED AIR PRESSURE WEATHER MONITORING DEVICE FOR AVIATION: It’s a useful device that checks the air velocity using a motor drive with blower to provide analogue input to the circuit.

MICROCONTROLLER BASED ULTRASONIC FLOW METER FOR LIQUID: It will read the flow of liquid from a pipe in digital form.

MICROCONTROLLER BASED BIDIRECTIONAL VISITOR COUNTER (ENTRY/EXIT): It check the entry and exit of persons using IR as sensing device and display the total at seven segment displays.

MICROCONTROLLER BASED PERPAID ENERGY METER: The project will count down the reading on the seven segment display in Naira as “Amount Balance”. The dummy two digit counter will act as Electric Meter count for units consumed. It will automatically cut off the load if no balance.

MICROCONTROLLER BASED DC MOTOR SPEED CONTROLLER: The DC motor can controlled in nine different speeds with a seven segment display to show the level.

MICROCONTROLLER BASED WIRELESS DEVICE CONTROL: The device or machine can be RF or IR control with this system.

MICROCONTROLLER BASED PROGRAMMABLE TIMER: One can set the desired time with keys display at four seven segment displays for single device to switch on/off.

MICROCONTROLLER BASED FOUR CHANNELS ANALOG TO DIGITAL CONVERTER: The controller takes 4 channel inputs and the output is interfaced to PC (serial port link) in VB program.

MICROPROCESSOR BASED ELEVATOR CONTROL SYSTEM: – The hardware interfaced with 8255 ports will display the request key for each floor operation using LEDs. The movement of lift is also displayed through moving lights

ELECTRONIC LOCK: – The keys in the range 0 to 9 are used to store the key code as well as to enter the code for opening the lock. The maximum five-digit number can be stored in the memory.

MICROCONTROLLER BASED SOLAR TRACKER: This project is a mini robot that tracks the solar energy of any given source (light). By taking samples of the solar content at an interval of five (5) minutes, the solar tracker will automatically adjust the solar sensor attached to it i.e. (solar panels, photon detectors, LDRS, etc) to the position that has the highest solar content hence yielding a superior utilization of the sensor. Its application includes; solar powered system like inverters both industrial and commercial capacity.

DIGITAL VOLTMETER: This is an 8bit, 4 digits digital measuring set. Its sampling rate is about 5 samples per second, that is to say it takes samples of voltage source connected across it probes and outputs the unknown voltage on the digital display 5 times in a second giving the set a superior sampling as opposed to the commercial analog DVMs.

REMOTE CONTROLLED FAN (SPEED REGULATION): Now you can control the speed of your fan without leaving your sofa. With the help of an encoder (remote control) you send out command to the fan via the receiver to either decrease or increase the speed of the fan.

REMOTE CONTROLLED GATE: With the help of a remote control you can seamlessly control the action of your gate without the need of employing a gate man. It’s simple, upon activation of the right button, the remote control sends out command to the gate via its receiver this in turn is decoded by an embedded control system that takes the proper action (opening or closing of the gate).

10KVA SINE WAVE INVERTER: The sine wave is based on the principle of PWM so that good regulation and stability of frequency and voltage is achieved. It uses SUP75N08 HEXFET™ from VISHAY™ to deliver the continuous power output.

LOGIC GATES IC TESTER: This gadget enables you to check most of the logic gates like XOR, XNOR, Latches, Flip Flops, ANDs, NANDs etc. it auto detects the chip when it is plugged in the ZIF socket of the tester telling you the part number of the chip and its state i.e.(bad or ok).

DIGITAL WALL CLOCK WITH CALENDAR: Just like the digital wall clock but with the extra feature of a calendar that accurately calculates the day, date, month, and the year and also flawlessly tell if it is a leap year.

MICROCONTROLLER BASED WATER LEVEL EQUILIBRATOR: Knowing the level of water in a tank or reservoir is very vital especially in cases where failure in water supply can be a very big disadvantage. Industries and companies have been into this mess for some time before the advent of the water level indicator. Previously, people have to be watchdogs over their water tanks in order to know exactly when to make a refill. Sometimes it works while other times, it skips our memory and we have to suffer water failure in our homes and industries for some time. This has led to the instances of refilling water tanks at intervals even when not due and this has posed a lot of stress to various people…

MICROCONTROLLER BASED ELECTRONIC SAFE: This is project is focused on security scheme. It is mastered by an embedded controller that compares the burnt (masked) password in its innards. Without the right combination of key the controller will not engage the door so that access to the safe is denied. Its features are shutting down the system when the wrong password is typed more than four times, user friendly beep as you walk through, and theft alarm immediately the trial…

DIGITAL TEMPERATURE MEASURING SET: This is an 8bit, 4 digits digital measuring set. Its sampling rate is about 5 samples per second, that is to say it takes samples of the unknown temperature and outputs it on digital display 5 times in a second giving the set a superior sampling as opposed to the commercial analog DTMs. It can measure temperature in the range of 0 to 1200 Fahrenheit.

REMOTE CONTROLLED ROBOT CAR:  control the bots this time with a remote control.

Microcontroller Based Intelligent Battery Charger: This project uses an embedded control to achieve excellent charging of a twelve volt battery as opposed to the analog technique that senses the voltage drop across the battery. It has three state of charging (1) Bulk, (2) Absorption, and (3) Float to achieve precise charge control.

AUTOMATIC DOOR OPENER: it senses nearness (proximity) and immediately opens the door without your command. It employs the phenomenon of Doppler shift to achieve this fit.

ELECTRONIC BILLING SYSTEM: It can be compared to the smart card billing system used by (PHCN_NEPA). The meter is loaded with a number that’s equivalent to a particular amount before being handed over to the consumer. The system is simply Pay As U Go, the higher the load the faster the reading and the quicker the preset card gets exhausted. The moment the card gets exhausted all electrical appliance connected to the meter will be disconnected unless recharged. This gadget is built around an embedded controller.

MICROCONTROLLER BASED INDUSTRIAL MOTOR SPEED CONTROL: THIS project focuses on the need on precision in industrial based motors. Its operation is simple – it accurately calculates the preset speed and automatically adjusts it when it senses any deviation.

MICROCONTROLLER BASED PROGRAMMABLE WATER HEATER:  With this system accurate setting of the water temperature can easily be achieved via keypad, i.e. set the heater unit to 30⁰c “go to sleep” when the water heats up to the preset value et voila! The heater is switched of there by preserving energy.

DATA ACQUISITION SYSTEM: This is a real time 8bit data logger that will digitize an analog quantity store it in a memory (bin) till it’s time for harvesting. Such an instrument may be dropped in a remote area say in the forest, mountains, places that are susceptible to natural disasters like; volcanic eruption, hurricanes, erosion etc… its major role there is to collect the climatic and weather condition, and the earth’s movement. By storing these data, one can easily tell the condition of a place there by saving cost that may…

MAGNETICALLY COUPLED THREE PHASE POWER PROTECTION SCHEME: it uses a three phase star technique to monitor the imbalance in a three phase network. For example when a particular phase is heavily loaded, this will cause a disturbance in the magnetic flux in the monitoring section hence an alarm may be triggered up or the system shutting down automatically thus safe guarding  expensive motors or  gadgets which may burn out as a result of excessive heat…

UNDER VOLTAGE AND OVER VOLTAGE POWER PROTECTION SCHEME

SOLAR METER: this instrument is used to measure the light energy of any source