IT and Programming Kali Linux-Assuring Security by Penetration Testing 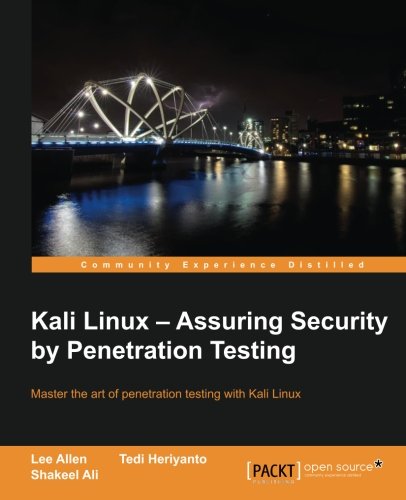 Kali Linux-Assuring Security by Penetration Testing: Written as an interactive tutorial, this book covers the core of Kali Linux with real-world examples and step-by-step instructions to provide professional guidelines and recommendations for you. The book is designed in a simple and intuitive manner that allows you to explore the whole Kali Linux testing process or study parts of it individually. If you are an IT security professional who has a basic knowledge of Unix/Linux operating systems, including an awareness of information security factors, and want to use Kali Linux for penetration testing, then this book is for you.

With Kali Linux you can test the vulnerabilities of your network and then take steps to secure it. This engaging tutorial is a comprehensive guide to this penetration testing platform, specially written for IT security professionals.

What people are saying

Kali Linux is one of the most advanced and versatile penetrating testing distribution ever created. It is a Debian derived Linux distribution designed for digital forensics and penetration testing. Kali Linux, it may be added, is a GPL-compliant Linux distribution built by penetration testers for penetration testers with development staff consisting of individuals spanning different languages, regions, industries, and nationalities.
Lee Allen,Tedi Heriyanto and Shakeel Ali have, painstakingly revealed the industry’s best approach for logical and systematic penetrating testing process.
The book starts from the basics – lab penetration and testing procedures – and goes on to elaborate about the basic installation and configuration set up, discussing different types of penetration testing, uncovering open security testing methodologies and proposing Kali Linux specific testing process.
It is a ‘must go through’ book for IT security professionals. However, they must have a basic knowledge of Unix/Linux operating systems. They must also have an awareness of information security factors.

The book focuses on developing penetration testing skills for ensuring complete security in the network environment. If you are an IT security professional, with a basic knowledge of Unix/Linux operating systems then the book is ideal instrument to prevent vulnerabilities in the network,
The book is fully focused on guiding you to develop practical penetrating testing skills by demonstrating step by step the hacker tools and techniques. The book starts with lab techniques and testing procedures, giving a detailed explanation on the basic installation and configuration set up, discussing different types of penetration testing methodologies and proposing the Kali Linux specific testing process.
A number of security assessment tools for conducting penetration testing in different categories (target scoping, information gathering, discovery, enumeration, vulnerability mapping, social engineering exploitation, privilege escalation,, maintaining access and reporting) have been discussed, following formal testing methodology.
The authors Lee Allen and Tedi Heriyantohave both combined together to give a complete treatise on complete security in your network system.