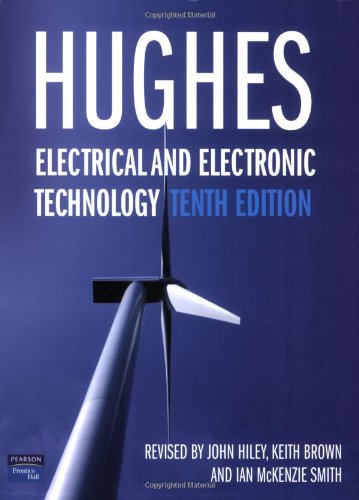 Hughes Electrical and Electronic Technology: Electrical engineering is a professional engineering discipline that generally deals with the study and application of electricity, electronics, and electromagnetism. This field first became an identifiable occupation in the later half of the 19th century after commercialization of the electric telegraph, the telephone, and electric power distribution and use. Subsequently, broadcasting and recording media made electronics part of daily life. The invention of the transistor, and later the integrated circuit, brought down the cost of electronics to the point they can be used in almost any household object.

Electrical engineers work in a very wide range of industries and the skills required are likewise variable. These range from basic circuit theory to the management skills required of a project manager. The tools and equipment that an individual engineer may need are similarly variable, ranging from a simple voltmeter to a top end analyzer to sophisticated design and manufacturing software.

The Institute of Electrical and Electronics Engineers (IEEE) is one of the most important and influential organizations for electronics engineers.

All engineers need to understand the fundamental principles of electrical and electronic technology. This best-selling text provides a clear and accessible introduction to the area, with balanced coverage of electrical, electronic, and power engineering