Free Novels online Harry Potter and the Order of the Phoenix 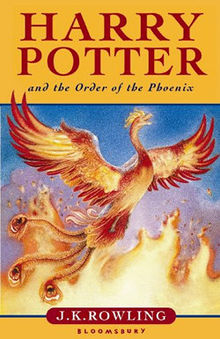 Harry Potter and the Order of the Phoenix is a fantasy novel written by J. K. Rowling and the fifth novel in the Harry Potter series. It follows Harry Potter’s struggles through his fifth year at Hogwarts School of Witchcraft and Wizardry, including the surreptitious return of the antagonist Lord Voldemort, O.W.L. exams, and an obstructive Ministry of Magic. The novel was published on 21 June 2003 by Bloomsbury in the United Kingdom, Scholastic in the United States, and Raincoast in Canada. Five million copies were sold in the first 24 hours of publication. It is the longest book of the series.

Harry Potter and the Order of the Phoenix has won several awards, including being named an American Library Association Best Book for Young Adults in 2003. The book has also been made into a film, which was released in 2007, and into a video game by Electronic Arts.

During summer vacation with his aunt Petunia and uncle Vernon, 15-year-old Harry Potter and his cousin Dudley are attacked by Dementors. After using magic to save Dudley and himself, Harry is almost expelled from Hogwarts, but the decision is later reversed after a hearing at the Ministry of Magic. Harry is whisked off by a group of wizards (including the real Mad-Eye Moody, Professor Lupin, and several new faces, including Nymphadora Tonks, a bubbly young witch who is a Metamorphmagus [a wizard who can change his/her appearance without a potion or spell], and Kingsley Shacklebolt, a senior Auror with egalitarian views) to Number 12, Grimmauld Place, the childhood home of his godfather, Sirius Black. The building also serves as the headquarters of the Order of the Phoenix, of which Mr. and Mrs. Weasley and Sirius are also members. Ron Weasley and Hermione Granger explain that the Order of the Phoenix is a secret organisation led by Hogwarts headmaster Albus Dumbledore, dedicated to fighting Lord Voldemort and his followers, the Death Eaters. From the members of the Order, Harry and the others learn that Voldemort is seeking an object that he did not have prior to his first defeat, and assume this object to be a weapon of some sort. Harry learns that the Ministry of Magic, led by Cornelius Fudge, is refusing to acknowledge Voldemort’s return because of the panic and chaos that doing so would cause, and has been running a smear campaign against him and Dumbledore.

At Hogwarts, Harry learns that Dolores Umbridge, a senior employee in the Ministry of Magic, will be the new Defence Against the Dark Arts teacher. Umbridge and Harry clash, as she, like Fudge, refuses to believe that Voldemort has returned. She punishes Harry for his rebellious outbursts by having him write “I must not tell lies” with a cursed quill that carves the phrase into his skin. She also refuses to teach her students how to perform defensive spells, prompting Harry, Ron and Hermione to form their own Defence Against the Dark Arts group (with students from Gryffindor, Ravenclaw and Hufflepuff), which they call Dumbledore’s Army. Many students sign up, including Neville Longbottom, Fred and George Weasley, Ginny Weasley and Luna Lovegood. Struggling to find a place to practise, Dobby the house elf tells him about the Room of Requirement and its uses. The club meet there to learn and practise defensive spells under Harry’s instruction.

Meanwhile, Rubeus Hagrid has not yet returned from the secret mission given to him by Dumbledore at the end of the previous book, and is absent for the first part of the school year. Upon his return, Harry, Ron, and Hermione learn that his mission, which was mostly unsuccessful, was to seek out the last giants to stop them from joining Lord Voldemort. Professor Umbridge has been steadily amassing more and more power and influence at the school, and as she begins regularly inspecting Hagrid’s Care of Magical Creatures lessons, it is clear that she intends to get rid of him.

One night, Harry has a vision through the eyes of Voldemort’s snake Nagini, possessed by Voldemort, attacking Ron’s father Arthur Weasley. Harry informs Professor McGonagall and Dumbledore, and Mr. Weasley is rescued. Dumbledore arranges for Harry to take Occlumency lessons with Professor Snape to protect his mind against further invasions by Voldemort.