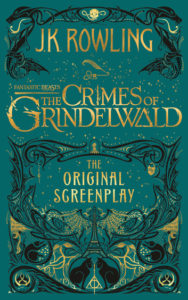 Fantastic Beasts: The Crimes of Grindelwald – At the end of Fantastic Beasts and Where to Find Them, the powerful Dark wizard Gellert Grindelwald was captured in New York with the help of Newt Scamander. But, making good on his threat, Grindelwald escapes custody and sets about gathering followers, most unsuspecting of his true agenda: to raise pure-blood wizards up to rule over all non-magical beings.

In an effort to thwart Grindelwald’s plans, Albus Dumbledore enlists Newt, his former Hogwarts student, who agrees to help once again, unaware of the dangers that lie ahead. Lines are drawn as love and loyalty are tested, even among the truest friends and family, in an increasingly divided Wizarding World.

This second original screenplay from J.K. Rowling, illustrated with stunning line art from MinaLima, expands on earlier events that helped shaped the Wizarding World, with some surprising nods to the Harry Potter stories that will delight fans of both the books and films.

Although she writes under the pen name J.K. Rowling, pronounced like rolling, her name when her first Harry Potter book was published was simply Joanne Rowling. Anticipating that the target audience of young boys might not want to read a book written by a woman, her publishers demanded that she use two initials, rather than her full name. As she had no middle name, she chose K as the second initial of her pen name, from her paternal grandmother Kathleen Ada Bulgen Rowling. She calls herself Jo and has said, “No one ever called me ‘Joanne’ when I was young, unless they were angry.” Following her marriage, she has sometimes used the name Joanne Murray when conducting personal business. During the Leveson Inquiry she gave evidence under the name of Joanne Kathleen Rowling. In a 2012 interview, Rowling noted that she no longer cared that people pronounced her name incorrectly.
Rowling was born to Peter James Rowling, a Rolls-Royce aircraft engineer, and Anne Rowling (née Volant), on 31 July 1965 in Yate, Gloucestershire, England, 10 miles (16 km) northeast of Bristol. Her mother Anne was half-French and half-Scottish. Her parents first met on a train departing from King’s Cross Station bound for Arbroath in 1964. They married on 14 March 1965. Her mother’s maternal grandfather, Dugald Campbell, was born in Lamlash on the Isle of Arran. Her mother’s paternal grandfather, Louis Volant, was awarded the Croix de Guerre for exceptional bravery in defending the village of Courcelles-le-Comte during the First World War.
[besclwpbutton url=”https://www.amazon.com/Fantastic-Beasts-Grindelwald-Original-Screenplay/dp/1338263897/ref=zg_bsnr_books_17?_encoding=UTF8&psc=1&refRID=ZSBDVMJAGPXPX7M9Q8FQ” newtab=”yes” besclwpbuttonstyle=”large”]GET THIS BOOK[/besclwpbutton]