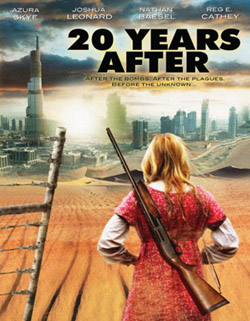 Twenty Years After (French: Vingt ans après) is a novel by Alexandre Dumas, first serialized from January to August 1845. A book of The d’Artagnan Romances, it is a sequel to The Three Musketeers and precedes The Vicomte de Bragelonne (which includes the sub-plot Man in the Iron Mask).

At this game, whoever does not kill is killed.’
Twenty Years After (1845), the sequel to The Three Musketeers, is a supreme creation of suspense and heroic adventure.

Two decades have passed since the musketeers triumphed over Cardinal Richelieu and Milady. Time has weakened their resolve, and dispersed their loyalties. But treasons and stratagems still cry out for justice: civil war endangers the throne of France, while in England Cromwell threatens to send Charles I to the scaffold. Dumas brings his immortal quartet out of retirement to cross swords with time, the malevolence of men, and the forces of history. But their greatest test is a titanic struggle with the son of Milady, who wears the face of Evil.

The novel follows events in France during the Fronde, during the childhood reign of Louis XIV, and in England near the end of the English Civil War, leading up to the victory of Oliver Cromwell and the execution of King Charles I. Through the words of the main characters, particularly Athos, Dumas comes out on the side of the monarchy in general, or at least the text often praises the idea of benevolent royalty. His musketeers are valiant and just in their efforts to protect young Louis XIV and the doomed Charles I from their attackers.

The action begins during the regency of Queen Anne of Austria (term 1643–1651), with Cardinal Mazarin as First Minister. D’Artagnan, who seemed to have a promising career ahead of him at the end of The Three Musketeers, has for twenty years remained a lieutenant, and seems unlikely to progress despite his ambition and the debt the queen owes him. He is summoned by Mazarin, who requires an escort; the French people detest Mazarin, and are on the brink of rebellion (La Fronde). D’Artagnan is sent to the Bastille to retrieve a prisoner, who turns out to be his former adversary, the Comte de Rochefort.

After renewing his acquaintance with d’Artagnan and making a promise to aid his advancement, Rochefort is brought to his audience with Mazarin, where he learns that the cause for his imprisonment was his refusal to serve Mazarin at an earlier stage. He does, however, remember his promise, and though he offers his own service to Mazarin, he refuses to watch over the Duc de Beaufort, who is imprisoned at the time, and soon learns that, in consequence, he is to be returned to the Bastille, though this does not deter him from speaking highly of the achievements of d’Artagnan and the Three Musketeers.

Having determined that d’Artagnan is the man he seeks, Mazarin enters the chambers of the Queen to let her know that he has enlisted the man who had served her so well twenty years earlier. The Queen, feeling guilty for having forgotten d’Artagnan’s service, gives Mazarin a diamond ring to return to d’Artagnan, one which she had previously given him that d’Artagnan sold. The avaricious Mazarin merely uses the diamond to show d’Artagnan that he is once again to enter the Queen’s service. He commissions d’Artagnan to go in search of his friends.

Reunion of the Four Musketeers

D’Artagnan is at a loss; he has completely lost touch with his friends, who have resumed their real names. Athos, the Comte de la Fère, had returned to his estate near Blois; Porthos, Monsieur du Vallon, had married a lawyer’s widow; and Aramis became a priest, the Abbé d’Herblay. Fortune intervenes when Planchet, his old servant, enters d’Artagnan’s chambers, attempting to escape arrest for aiding the escape of Rochefort. Through Planchet, he locates Bazin, Aramis’ old servant, now beadle at Notre Dame. Though Bazin is unwilling to help, d’Artagnan is able to find out, through an altar boy, that Bazin makes frequent visits to Noisy. D’Artagnan and Planchet go there, where they are set upon by a group who think them Frondeurs while outside the house of Madame de Longueville. When this group is satisfied that d’Artagnan is not the man they seek, Aramis surprises Planchet by dropping onto his horse from the tree in which he had been hiding.

D’Artagnan finds that the former musketeer, who had thought of little other than being a priest, is now a priest who thinks of little other than being a soldier. Aramis is not willing to enter into Mazarin’s service, however. D’Artagnan leaves but waits in hiding, suspecting that Aramis is both the Frondeur who had been sought earlier and the lover of Madame de Longueville. His suspicions are confirmed.

The visit to Aramis was not fruitless, as it yielded the address of Porthos. When d’Artagnan arrives at Porthos’ estate he finds Mousqueton, who is overjoyed to meet d’Artagnan and Planchet. He finds that Porthos, despite his wealth and life spent in pursuit of amusement, is not happy. Porthos desires to become a baron, and with this bait d’Artagnan lures him into Mazarin’s service.

D’Artagnan then continues his search for Athos, whom he finds almost completely changed, to be an example to his ward, Raoul. Though Athos will not be enlisted into Mazarin’s service, and indeed reveals that his sympathies lie against Mazarin, the two arrange to meet again in Paris; Athos wishes to bring Raoul there to help him to become a gentleman, and also to separate him from Louise de la Vallière, with whom Raoul is obsessively in love. In Paris, Athos visits Madame de Chevreuse, the former mistress of Aramis, with whom, under the name Marie Michon, Aramis had much communication in The Three Musketeers. Athos reveals, discreetly, that Raoul is the son born of a chance encounter he had with her, and through her gets a letter of recommendation for Raoul to join the army.