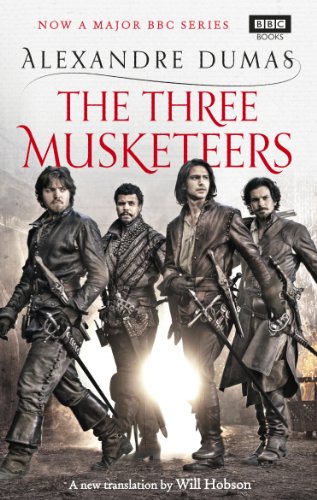 The Three Musketeers is a historical adventure novel written in 1844 by French author Alexandre Dumas.

Set in 1625–1628, it recounts the adventures of a young man named d’Artagnan (based on Charles de Batz-Castelmore d’Artagnan) after he leaves home to travel to Paris, to join the Musketeers of the Guard. Although d’Artagnan is not able to join this elite corps immediately, he befriends the three most formidable musketeers of the age—Athos, Porthos and Aramis—and gets involved in affairs of the state and court.

Alexandre Dumas’s most famous tale— and possibly the most famous historical novel of all time— in a handsome hardcover volume.

This swashbuckling epic of chivalry, honor, and derring-do, set in France during the 1620s, is richly populated with romantic heroes, unattainable heroines, kings, queens, cavaliers, and criminals in a whirl of adventure, espionage, conspiracy, murder, vengeance, love, scandal, and suspense. Dumas transforms minor historical figures into larger- than-life characters: the Comte d’Artagnan, an impetuous young man in pursuit of glory; the beguilingly evil seductress “Milady”; the powerful and devious Cardinal Richelieu; the weak King Louis XIII and his unhappy queen—and, of course, the three musketeers themselves, Athos, Porthos, and Aramis, whose motto “all for one, one for all” has come to epitomize devoted friendship. With a plot that delivers stolen diamonds, masked balls, purloined letters, and, of course, great bouts of swordplay, The Three Musketeers is eternally entertaining

In genre, The Three Musketeers is primarily a historical and adventure novel. However, Dumas also frequently works into the plot various injustices, abuses, and absurdities of the old regime, giving the novel an additional political aspect at a time when the debate in France between republicans and monarchists was still fierce. The story was first serialised from March to July 1844, during the July Monarchy, four years before the French Revolution of 1848 violently established the Second Republic.

The story of d’Artagnan is continued in Twenty Years After and The Vicomte of Bragelonne: Ten Years Later

In 1625 France, d’Artagnan (a poor young nobleman) leaves his family in Gascony and travels to Paris to join the Musketeers of the Guard. At a house in Meung-sur-Loire, an older man derides d’Artagnan’s horse. Insulted, d’Artagnan demands a duel. The older man’s companions beat d’Artagnan unconscious with a cooking pot and a metal tong that breaks his sword. His letter of introduction to Monsieur de Tréville, the commander of the Musketeers, is also stolen. D’Artagnan resolves to avenge himself upon the man (who is later revealed to be the Comte de Rochefort, an agent of Cardinal Richelieu, who is passing orders from the Cardinal to his spy Lady de Winter, usually called Milady de Winter or simply Milady).

In Paris, d’Artagnan visits M. de Tréville at the headquarters of the Musketeers, but without the letter, Tréville politely refuses his application. He does, however, write a letter of introduction to an academy for young gentlemen which may prepare him for recruitment at a later time. From Tréville’s window, d’Artagnan sees Rochefort passing in the street below and rushes out of the building to confront him, but in doing so he offends three Musketeers, Athos, Porthos, and Aramis, who each demand satisfaction; d’Artagnan must fight a duel with all of them that afternoon. As d’Artagnan prepares himself for the first duel, he realizes that Athos’ seconds are Porthos and Aramis, who are astonished that the young Gascon intends to duel them all. As d’Artagnan and Athos begin, Cardinal Richelieu‘s guards appear and try to arrest d’Artagnan and the three Musketeers for illegal dueling. Although outnumbered, the four men win the battle. D’Artagnan seriously wounds Jussac, one of the Cardinal’s officers and a renowned fighter. After learning of this, King Louis XIIIappoints d’Artagnan to Des Essart’s company of the King’s Guards and gives him forty pistoles.

D’Artagnan hires a servant (Planchet), finds lodgings, and reports to Monsieur des Essart. Des Essart’s company is a less prestigious regiment in which he must serve for two years before being considered for the Musketeers. Shortly after, his landlord speaks to him about his wife Constance Bonacieux’s kidnapping. When she is presently released, d’Artagnan falls in love at first sight with her. She works for Queen Anne of France, who is secretly conducting an affair with the Duke of Buckingham. The King, Louis XIII, gave the Queen a gift of diamond studs but she gives them to her lover as a keepsake. Cardinal Richelieu, who wants war between France and England, plans to expose the tryst and persuades the King to demand the Queen wear the diamonds to a soirée that the Cardinal is sponsoring. Constance tries to send her husband to London but the man is manipulated by Richelieu and does not go, so d’Artagnan and his friends intercede. En route, the Cardinal’s henchmen repeatedly attack them and only d’Artagnan and Planchet reach London. Before arriving, d’Artagnan is compelled to assault and nearly kill the Comte de Wardes, a friend of the Cardinal, cousin of Rochefort and Milady’s lover. Although Milady stole two of the diamond studs, the Duke of Buckingham provides replacements while delaying the thief’s return to Paris. D’Artagnan is thus able to return a complete set of jewels to Queen Anne just in time to save her honour. In gratitude, she gives him a beautiful ring.

Shortly afterwards, d’Artagnan begins an affair with Madame Bonacieux. Arriving for an assignation, he sees signs of a struggle and discovers that Rochefort and M. Bonacieux, acting under the orders of the Cardinal, have assaulted and imprisoned her. D’Artagnan and his friends, now recovered from their injuries, return to Paris. D’Artagnan meets Milady de Winter officially, and recognizes her as one of the Cardinal’s agents, but becomes infatuated with her until her maid reveals that Milady is indifferent toward him. Entering her quarters in the dark, he pretends to be the Comte de Wardes and trysts with her. He finds a fleur-de-lis branded on Milady’s shoulder, marking her as a felon. Discovering his identity, Milady attempts to kill him but d’Artagnan eludes her. He is ordered to the Siege of La Rochelle.

He is informed that the Queen has rescued Constance from prison. In an inn, the musketeers overhear the Cardinal asking Milady to murder the Duke of Buckingham, a supporter of the Protestant rebels at La Rochelle who has sent troops to assist them. Richelieu gives her a letter that excuses her actions as under orders from the Cardinal himself, but Athos takes it. The next morning, Athos bets that he, d’Artagnan, Porthos, and Aramis, and their servants can hold the recaptured St. Gervais bastion against the rebels for an hour, for the purpose of discussing their next course of action. They resist for an hour and a half before retreating, killing 22 Rochellese in total. They warn Lord de Winter and the Duke of Buckingham. Milady is imprisoned on arrival in England but seduces her guard, Felton (a fictionalization of the real John Felton), and persuades him to allow her escape and to kill Buckingham himself. On her return to France, Milady hides in a convent where Constance is also staying. The naive Constance clings to Milady, who sees a chance for revenge on d’Artagnan, and fatally poisons Constance before d’Artagnan can rescue her.

The Musketeers arrest Milady before she reaches Cardinal Richelieu. They bring an official executioner, put her on trial and sentence her to death. After her execution, the four friends return to the siege of La Rochelle. The Comte de Rochefort arrests d’Artagnan and takes him to the Cardinal. When questioned about Milady’s execution, d’Artagnan presents her letter of pardon as his own. Impressed with d’Artagnan’s willfulness and secretly glad to be rid of Milady, the Cardinal destroys the letter and writes a new order, giving the bearer a promotion to lieutenant in the Tréville company of musketeers, leaving the name blank. D’Artagnan offers the letter to Athos, Porthos, and Aramis in turn but each refuses it; Athos because it is below him, Porthos because he is retiring to marry his wealthy mistress and Aramis because he is joining the priesthood. D’Artagnan, though heartbroken and full of regrets, gets the promotion he coveted.