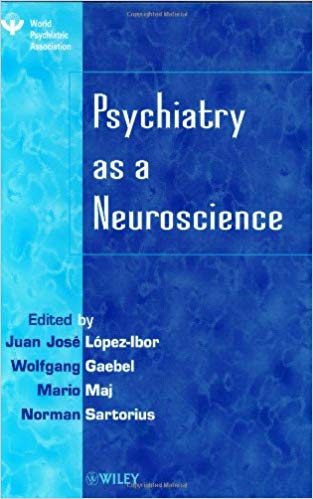 Psychiatry as a Neuroscience provides an overview of recent solid advances in biological psychiatry which are of clinical relevance.

Psychiatry includes the assessment, treatment, and prevention of complex brain disorders, such as depression, bipolar disorder, anxiety disorders, schizophrenia, developmental disorders (e.g., autism), and neurodegenerative disorders (e.g., Alzheimer dementia). Its core mission is to prevent and alleviate the distress and impairment caused by these disorders, which account for a substantial part of the global burden of illness-related disability. Psychiatry is grounded in clinical neuroscience. Its core mission, now and in the future, is best served within this context because advances in assessment, treatment, and prevention of brain disorders are likely to originate from studies of etiology and pathophysiology based in clinical and translational neuroscience. To ensure its broad public health relevance in the future, psychiatry must also bridge science and service, ensuring that those who need the benefits of its science are also its beneficiaries. To do so effectively, psychiatry as clinical neuroscience must strengthen its partnerships with the disciplines of public health (including epidemiology), community and behavioral health science, and health economics.

Psychiatry is the medical specialty that seeks to help (i.e., assess and treat) people and families living with complex brain disorders including depression, bipolar disorder, anxiety disorders, schizophrenia, substance abuse disorders, developmental disorders such as autism, and neurodegenerative disorders such as Alzheimer dementia. Traditionally, disorders falling into the province of psychiatry have been those of unknown etiology, and, as researchers have ascertained etiology, some disorders, such as central nervous system disorders, have often shifted to the province of neurology. (Tertiary syphilis is a good historical example of this shift.) Now, however, with the tools of modern neuroscience, a deeper understanding of causal pathways to major neuropsychiatric illness is evolving, thus rendering artificial the boundary between psychiatry and neurology.