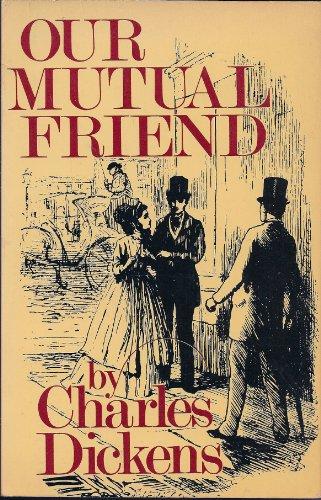 A satiric masterpiece about the allure and peril of money, Our Mutual Friend revolves around the inheritance of a dust-heap where the rich throw their trash. When the body of John Harmon, the dust-heap’s expected heir, is found in the Thames, fortunes change hands surprisingly, raising to new heights “Noddy” Boffin, a low-born but kindly clerk who becomes “the Golden Dustman.” Charles Dickens’s last complete novel, Our Mutual Friend encompasses the great themes of his earlier works: the pretensions of the nouveaux riches, the ingenuousness of the aspiring poor, and the unfailing power of wealth to corrupt all who crave it. With its flavorful cast of characters and numerous subplots, Our Mutual Friend is one of Dickens’s most complex—and satisfying—novels.

Our Mutual Friend, written in the years 1864–65, is the last novel completed by Charles Dickens and is one of his most sophisticated works, combining savage satire with social analysis. It centres on, in the words of critic J. Hillis Miller, quoting from the character Bella Wilfer in the book, “money, money, money, and what money can make of life.”

Most reviewers in the 1860s continued to praise Dickens’ skill as a writer in general, though not reviewing this novel in detail. Some found the plot too complex, and not well laid out. The Times of London found the first few chapters did not draw the reader into the characters. However, in the 20th century reviewers have found much to approve in the later novels of Dickens, including Our Mutual Friend. In the late 20th and early 21st century, some reviewers suggested that Dickens was experimenting with structure, and that the characters considered somewhat flat and not recognized by the contemporary reviewers were true representations of the Victorian working class and key to understanding the structure of the society depicted by Dickens in this novel

Charles John Huffam Dickens (7 February 1812 – 9 June 1870) was an English writer and social critic. He created some of the world’s best-known fictional characters and is regarded as the greatest novelist of the Victorian era. His works enjoyed unprecedented popularity during his lifetime, and by the twentieth century critics and scholars had recognised him as a literary genius. His novels and short stories enjoy lasting popularity.

Born in Portsmouth, Dickens left school to work in a factory when his father was incarcerated in a debtors’ prison. Despite his lack of formal education, he edited a weekly journal for 20 years, wrote 15 novels, five novellas, hundreds of short stories and non-fiction articles, lectured and performed extensively, was an indefatigable letter writer, and campaigned vigorously for children’s rights, education, and other social reforms.

Dickens was regarded as the literary colossus of his age. His 1843 novella, A Christmas Carol, remains popular and continues to inspire adaptations in every artistic genre. Oliver Twist and Great Expectations are also frequently adapted, and, like many of his novels, evoke images of early Victorian London. His 1859 novel, A Tale of Two Cities, set in London and Paris, is his best-known work of historical fiction. Dickens’s creative genius has been praised by fellow writers—from Leo Tolstoy to George Orwell and G. K. Chesterton—for its realism, comedy, prose style, unique characterisations, and social criticism. On the other hand, Oscar Wilde, Henry James, and Virginia Woolf complained of a lack of psychological depth, loose writing, and a vein of saccharine sentimentalism. The term Dickensian is used to describe something that is reminiscent of Dickens and his writings, such as poor social conditions or comically repulsive characters.

On 8 June 1870, Dickens suffered another stroke at his home after a full day’s work on Edwin Drood. He never regained consciousness, and the next day, five years to the day after the Staplehurst rail crash, he died at Gad’s Hill Place. Contrary to his wish to be buried at Rochester Cathedral “in an inexpensive, unostentatious, and strictly private manner,” he was laid to rest in the Poets’ Corner of Westminster Abbey. A printed epitaph circulated at the time of the funeral reads: “To the Memory of Charles Dickens (England’s most popular author) who died at his residence, Higham, near Rochester, Kent, 9 June 1870, aged 58 years. He was a sympathiser with the poor, the suffering, and the oppressed; and by his death, one of England’s greatest writers is lost to the world.” His last words were: “On the ground”, in response to his sister-in-law Georgina’s request that he lie down.