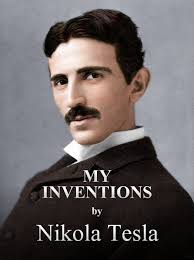 This important title is the autobiography of Nikola Tesla. Nikola Tesla appropriately titled his work on his life, My Inventions, as he was one of the most important inventors and scientists in history. The book touches on his life and career, his first inventions, discovering the magnetic field, tesla coil and transformer and the manifying transmitter. There is also a chapter on the art of teleautomatics. This book should be read by anybody interested in the life of this important inventor and scientist and his important discoveries which have revolutionized the world

Welcome to Nikola Tesla’s autobiography My Inventions. Tesla was 63 years old when this text was first published in the Electrical Experimenter magazine in 1919.

I was taking electronics engineering classes in college when I first learned about Nikola Tesla. I discovered that Tesla developed several of the most important technologies we use today. I thought it strange that Tesla had contributed so much to the world, yet he’s virtually unknown to most people. He’s a true unsung hero. I became so interested in Tesla that I eventually built my own Tesla coil, I wrote a Tesla coil design program called TeslaMap and created the Tesla Coil Design, Construction and Operation Guide. But enough about me…

It seems any mention of Nikola Tesla must be accompanied by a few obligatory proverbs – he was a genius, he transformed the world, he was ahead of his time, etc. But few people know that he was more than a great inventor. After reading My Inventions I discovered that Tesla was quite eccentric, he had a good sense of humor and he was quite a ladies man (although he never married). He suffered from hallucinations and several undiagnosed mental disorders, likely Obsessive Compulsive Disorder with a touch of Autism – possibly making Tesla a genuine “mad scientist”.

My Inventions is full of fascinating and sometimes bizarre stories. Tesla tells us how he narrowly escaped death on several occasions, traveled the world, rubbed elbows with celebrities, captains of industry and the greatest scientists of his time. In one particularly strange incident, Tesla describes being chased by a frantic mob in a case of mistaken identity. It’s difficult to find a more intriguing and strange autobiography.

We’re fortunate that Tesla’s autobiography has survived the decades. It gives us a glimpse into Tesla’s enthralling life in his own words. Perhaps after reading My Inventions you’ll also be compelled to build your own Tesla coil (if you’re electrically inclined) or investigate the profound changes Tesla made to our modern world.