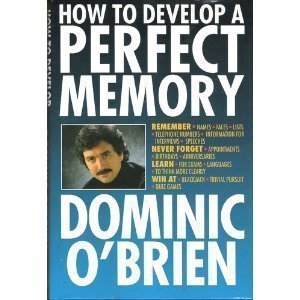 How to Develop a Perfect Memory I know what it is like to forget someone’s name. In my time, I have forgotten appointments, telephone numbers, speeches, punch lines of jokes, directions, even whole chapters of my life. Up until recently, I was the most absent-
minded, forgetful person you could imagine. I once saw a cartoon of two people dancing rather awkwardly at the Amnesiacs’ Annual Ball. The man was saying to the woman, ‘Do I come here often?’ I knew how he felt.
Within the last four years, I have become the World Memory Champion. I regularly appear on television and tour the country as a celebrity ‘Memory Man’, rather like Leslie Welch did in the 1950s. There’s no trickery in what I
do – no special effects or electronic aids. I just sat down one day and decided enough was enough: I was going to train my memory.

Some people have asked me whether they need to be highly intelligent to have a good memory, sensing that my achievements might be based on an exceptional IQ. It’s a flattering idea, but not true. Everything I have done could be equally achieved by anyone who is prepared to train their memory.
I didn’t excel at school. Far from it. I got eight mediocre O levels and dropped out before taking any A levels. I couldn’t concentrate in class and I wasn’t an avid reader. At one point, my teachers thought I was dyslexic. I was
certainly no child prodigy. However, training my memory has made me more switched on, mentally alert, and observant than I ever was.