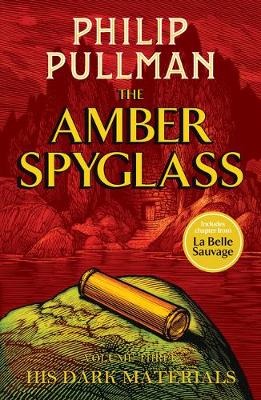 Will is the bearer of the knife. Now, accompanied by angels, his task is to deliver that powerful, dangerous weapon to Lord Asriel – by the command of his dying father.

But how can he go looking for Lord Asriel when Lyra is gone? Only with her help can he fathom the myriad plots and and intrigues that beset him.

The two great powers of the many worlds are lining up for war, and Will must find Lyra, for together they are on their way to battle, an inevitable journey that will even take them to the world of the dead

Mrs Coulter keeps her daughter Lyra drugged in a remote cave hidden from the Magisterium, a theocratic authority determined to kill Lyra to prevent her from causing a new fall of man. Lyra dreams she meets her dead friend Roger in the land of the dead, and promises to help him.

In Cittàgazze, a city in a parallel world, angels Balthamos and Baruch are instructed to take Lyra’s friend Will to Lord Asriel, whose army are preparing to fight the Magisterium, but Will refuses until Lyra is rescued.

When they are attacked by a soldier of the archangel Metatron, Will uses the subtle knife, which has a blade so sharp it can cut windows into other worlds, to escape. Baruch delivers a message to Asriel, but dies from wounds sustained fighting angels loyal to Metatron.

The Magisterium sends an assassin, Father Gomez, to follow the physicist Mary Malone, hoping that Mary will lead him to Lyra. Mary goes through another window into a world where she meets sapient, elephantine creatures called mulefa who use large seedpods attached to their feet as wheels.

She learns that the seedpod trees have been dying out for centuries. Mary uses the tree sap lacquer to construct a spyglass that allows her to see the particles known as dust, which is no longer nourishing the trees that the mulefa depend on.

Will meets Iorek Byrnison, king of the armoured bears, who are migrating south to avoid the Arctic melt caused by Lord Asriel’s experiments. Will impresses Iorek by destroying his helmet with the subtle knife, and Iorek agrees to help rescue Lyra.

Will, Iorek, Balthamos, Asriel’s army and Magisterium forces converge on Mrs Coulter’s cave, where Will wakes Lyra. As he cuts a window into another world, Mrs Coulter’s sudden arrival reminds him of his sick mother, which breaks his concentration, and he shatters the knife.

He and two Gallivespian spies, Tialys and Salmakia, escape with Lyra to another world. Iorek repairs the knife.

Lyra, Will, Tialys and Salmakia travel to the world of the dead to fulfil Lyra’s promise to Roger. They are forced to leave their dæmonsbehind, causing them enormous pain.

After they find Roger, they strike a deal with the harpies: in exchange for allowing them to open a window so the dead can escape, the harpies will hear the stories of the dead, and may bar access to those who have not lived full lives. The dead step through and dissolve, reunited with the universe. 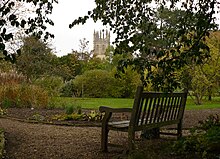 The wooden bench at the back of the Oxford Botanic Garden featured in The Amber Spyglass and shown in a photograph in the sequel, Lyra’s Oxford.

Will and Lyra must return to Asriel’s realm to retrieve their dæmons; Will’s dæmon, previously invisible, is now visible. They are joined by the ghosts of Will’s father and Lee Scoresby, who decide to remain intact to join Asriel’s army and fight the spectres, wraith-like creatures that devour adult souls. The battle between Asriel’s army and the forces of the Authority begins.

Mrs Coulter, who has allied herself with Asriel, enters the Authority’s citadel, where she meets the Regent Metatron. She leads Metatron to Asriel, but betrays him, uniting with Asriel to attack Metatron. All three fall into an abyss and cease to exist. Will and Lyra free the Authority from Metatron’s crystal prison, but he is so feeble that the atmosphere dissolves him.