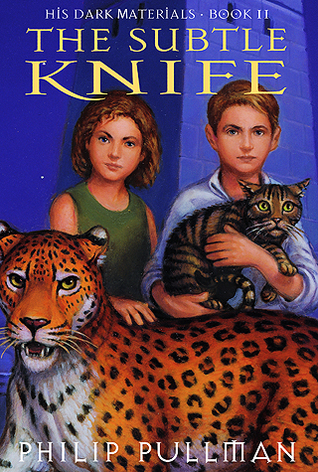 The Subtle Knife, the second book in the His Dark Materials series, is a young-adult fantasy novel written by Philip Pullman and published in 1997.

The novel continues the adventures of Lyra Belacqua as she investigates the mysterious Dust phenomenon and searches for her father. Will Parry is introduced as a companion to Lyra, and together they explore the new realms to which they have both been introduced.

Lost in a new world, Lyra finds Will—a boy on the run, a murderer—a worthy and welcome ally. For this is a world where soul-eating Specters stalk the streets and witches share the skies with troops of angels.

Each is searching—Lyra for the meaning of Dark Matter, Will for his missing father—but what they find instead is a deadly secret, a knife of untold power. And neither Lyra nor Will suspects how tightly their lives, their loves, and their destinies are bound together… until they are split apart

Twelve-year-old Will Parry is caring for his mentally ill mother. He accidentally kills an intruder and runs away to Oxford, where he discovers a portal to a parallel universe.

In the deserted city of Cittàgazze, he encounters 12-year-old Lyra Silvertongue and her dæmon Pantalaimon, who arrived via a bridge in the sky created by her father, Lord Asriel.

The witch Serafina Pekkala eavesdrops on Mrs. Coulter, Lyra’s wicked mother, torturing a witch for the prophecy that concerns Lyra. Serafina and a troop of witches search for Lyra, while aeronaut Lee Scoresby searches for Stanislaus Grumman; Grumman may have knowledge of a powerful object which Scoresby intends to use to protect Lyra.

Will returns to his world through the portal and finds information about his father, who went missing on an expedition. Lyra searches Will’s Oxford for information about Dust, mysterious particles connected to consciousness.

On the advice of her alethiometer, a truth-telling device, Lyra meets the physicist Dr. Mary Malone, who has a machine that communicates with dark matter. Police question Lyra and her knowledge of Will, and she accidentally gives him away.

After accepting a lift from a gentleman introducing himself as Sir Charles Latrom, Lyra realises he has stolen her alethiometer. Sir Charles forces Will and Lyra into retrieving a mysterious knife from Cittàgazze for the alethiometer’s return.

They defeat a youth who has taken the knife from its holder, Giacomo Paradisi, but Will loses two fingers in the fight. Giacomo explains that this is the sign of the knife’s next bearer, and explains its power: the ability to cut through any material, even the fabric between worlds. He also explains that their world is haunted by soul-eating Spectres, which prey on older children and adults but are invisible to children.