Biography Download Behind the Beautiful Forevers by Katherine Boo 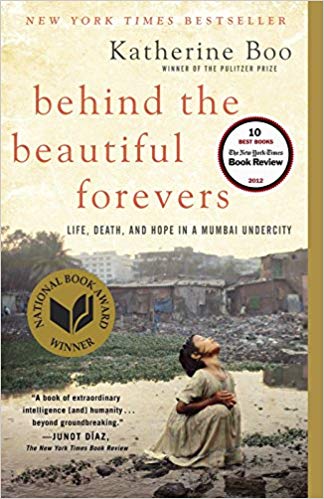 Behind the Beautiful Forevers

Behind the Beautiful Forevers: Life, Death, and Hope in a Mumbai Undercity is a non-fiction book written by the Pulitzer Prize-winner Katherine Boo in 2012. It won the National Book Award and the Los Angeles Times Book Prize among many others. It has also been adapted into a play by David Hare in 2014, shown on National Theatre Live in 2015. The book describes a present-day slum of Mumbai, India, named Annawadi, and located near the Chhatrapati Shivaji International Airport. It follows the interconnected lives of several residents, including a young trash picker, a female “slumlord,” and a college student. The author is an American woman who often visited Mumbai with her husband, who was from the area and had a job in the city. An excerpt from the book was also used in the AQA IGCSE English Language exam in June 2014

Annawadi is a slum created on land belonging to the Mumbai Airport. It was settled initially by migrant workers who had come to work on the airport in 1991 and stayed behind. The workers reclaimed a piece of airport land that was marshy and otherwise unusable. It quickly grew into a sprawling, densely inhabited zone of makeshift shacks, filled primarily with recent migrants to Mumbai from all over India and Pakistan. Ethnically, it is a mixture of many different groups and languages. Boo got to know the people there during the course of three years and in this work writes about the daily stresses and problems that inhabitants must contend with, such as poverty, hunger, disease, dirt, ethnic strife, violence, the constant fear that the airport authority will bulldoze their homes since they are technically there illegally, corruption, fatigue, weather, and the interpersonal conflicts that are augmented by being forced to live in close quarters with many others. She focuses on people such as Sunil, a stunted orphan who is a garbage picker; Abdul, a second generation garbage picker; Fatima, an emotionally troubled woman with one leg who dreams of a different life; Manju, who is trying to become the first female resident of Annawadi to graduate from college, and her mother, Asha, who is trying to attain the role of “slumlord”, giving her access to power, money, and respect, but at the price of becoming part of the corruption around her. One of the central dramas around which the book centers is the self-immolation of Fatima, who then makes a false statement to the police that it was the fault of Abdul, his sister, and his father.

Katherine Boo chose Annawadi to study because the scale of this “sumpy plug of slum” bordering a lake of sewage was small, and its location was fraught with possibilities. Annawadi sits beside the road to the Mumbai airport, on “a stretch where new India and old India collided and made new India late,” as Boo explains in her introduction. The author has noted that she does not see the characters in the book as a representation of Indian people as a whole. They do not encompass what life is like for all people in Annawadi. Furthermore, the author sees herself in each character. Each one of them is undergoing struggles that they must learn to overcome.