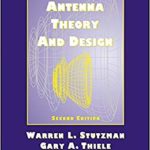 This introduction to antenna theory and design is suitable for senior undergraduate and graduate courses on the subject.   Its emphasis on both principles and design makes it perfect both as a college text and as a reference to the practicing engineer. The final three chapters on computational electromagnetics for antennas are suitable for graduate work. Stutzman provides more of a pedagogical approach than its competitors, placing a greater emphasis on a concise easily understandable presentation of fundamentals and applications as well as computational methods.

Since the first edition of Antenna Theory and Design was published in 1981, there
have been major expansions of application areas for antennas, mainly in wireless
communications. In addition, in recent years new areas important to antennas have
emerged into prominence. This second edition has been expanded to include new
areas in antennas. Coverage of microstrip antennas (Sec. 5.8) as well as the use of
antennas in systems and measurements (Chapter 9) have been added. In addition,
the treatments of array antennas (Chapter 3), broadband antennas (Chapter 6), and
aperture antennas (Chapter 7) have been expanded. Also, since the first edition was
written there have been major advances in Computational Electromagnetics
(CEM), due in part to the use of more sophisticated antennas and antenna systems.
The second edition expands on the Method of Moments in Chapter 10, introduces
a succinct treatment of the Finite Difference-Time Domain (FD-TD) technique for
antennas in Chapter 11, and adds the topic of the Physical Theory of Diffraction
(PTD) to high frequency methods in Chapter 12. The objective in the second edition
has been to preserve the simplicity of the first edition, while adding modem topics.
This book is a textbook and finds its widest use in the college classroom. Thus,

the primary purpose is to emphasize the understanding of principles and the de-
velopment of techniques for examining and designing antenna systems. Handbooks

are available to supplement the fundamentals and antennas discussed here. We have
found that the first edition is in wide use by practicing engineers as well as students.
This is because of the applied nature of the material and the treatment of basic
topics that are directly useable for analyzing practical antennas. This is illustrated
by the material in Chapters 1 to 6 and 9, which do not rely heavily on mathematics
and use calculus sparingly.
Antenna Theory and Design covers antennas from three perspectives: antenna
fundamentals, antenna techniques, and the design of popular antennas. The first
four chapters stress antenna fundamentals. Since the student has probably had little

exposure to antennas, many fundamentals are presented in Chapter 1. The emer-
gence of antenna theory from Maxwell’s equation!) is developed, along with a phys-
ical explanation of how antennas radiate.