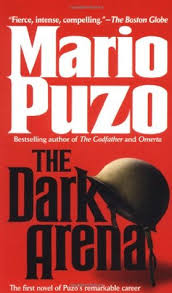 The Dark Arena is the first novel by Mario Puzo, published in 1955.

The book follows Walter Mosca, an American World War II veteran who returns to Germany for his girlfriend, Hella. The novel explores life in post-war Germany, a place where the standard currency is not the German mark or even the US dollar but US-made cigarettes.

Mario Puzo won international acclaim for The Godfather and his other Mafia novels. But before creating those masterpieces, Puzo wrote his first acclaimed novel The Dark Arena-an astounding story of a war-scarred young American in a battle against corruption and betrayal. . . .

After coming home at the end of World War II, Walter Mosca finds himself too restless for his civilian role in America. So he returns to Germany to find the woman he had once loved-and to start some kind of life in a vanquished country. But ahead of Walter stretches a dark landscape of defeat and intrigue, as he succumbs to the corrupting influences of a malevolent time. Now he enters a different kind of war, one in which he must make a fateful decision-between love and ambition, passion and greed, life and death

i read this one in the darkest days of my life, when i thought too much about my life, about what i’d lost and how i could… die without hurting anyone around me. i felt touched with this story of a soldier who couldn’t again get in touch with his loved ones at homeland and that made him return to Germany to find the only one, his woman, who got all his trust during darkest days of the WWII. her love helped him go on with his life until the day she passed away. nothing left and worth to him since her death, even their own child. what he lost was not only his loved one, not only his family or his nation, but also his trust in life. at the end of the novel, he got lost, and tried to run away, cared nothing for what was next in his life, he left his baby to an old woman who got his wife’s trust and got away.

years later, when i read “a movable feast” by ernest hemingway, i started to think back about “the dark arena” and got to know more about those of the lost generation. life is so hard.

this one is necessary for one’s life to know the truth about living and trusting. it’s also my favorite book of all time in my own life.