IT and Programming Beginning Game Development With Python and Pygame 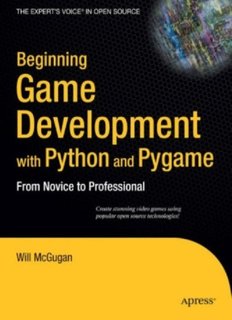 Game Development With Python and Pygame: Like music and movies, video games are rapidly becoming an integral part of our lives. Over the years, you’ve yearned for every new gaming console, mastered each blockbuster within weeks after its release, and have even won a local gaming competition or two. But lately you’ve been spending a lot of time thinking about a game idea of your own, or are exploring the possibility of making a career of this vibrant and growing industry. But where should you begin?

Beginning Game Development with Python and Pygame is written with the budding game developer in mind, introducing games development through the Python programming language and the popular Pygame games development library. Authored by industry veteran and Python expert Will McGugan, who worked on the MotorStorm game for PlayStation 3, you’ll be privy to insights that will not only help you to exploit Pygame to its maximum potential, but also make you a more creative and knowledgeable games developer all round.