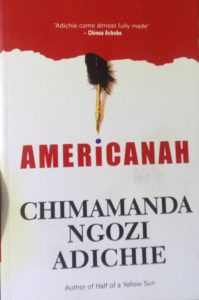 Americanah by Chimamanda Ngozi Adichie – Americanah is a 2013 novel by the Nigerian author Chimamanda Ngozi Adichie, for which Adichie won the 2013 National Book Critics Circle Fiction award. Americanah tells the story of a young Nigerian woman, Ifemelu, who immigrates to the United States to attend university. The novel traces Ifemelu’s life in both countries, threaded by her love story with high school classmate Obinze. A television miniseries, starring and produced by Lupita Nyong’o, is in development.

As teenagers in a Lagos secondary school, Ifemelu and Obinze fall in love. Nigeria at the time is under military dictatorship, and people are seeking to leave the country. Ifemelu departs for the United States to study. Through her experiences in relationships and studies, she struggles with the experience of racism in American culture, and the many varieties of racial distinctions. Upon coming to America, Ifemelu discovered for the first time what it means to be a “Black Person”. Obinze, son of a professor, had hoped to join her in the US but he is denied a visa after 9/11. He goes to London, eventually becoming an undocumented immigrant after his visa expires.

Years later, Obinze returns to Nigeria and becomes a wealthy man as a property developer in the newly democratic country. Ifemelu gains success in the United States, where she becomes known for her blog about race in America, entitled “Raceteenth or Various Observations About American Blacks (Those Formerly Known as Negroes) by a Non-American Black”. When Ifemelu returns to Nigeria, the two consider the viability of reviving a relationship in light of their diverging experiences during their many years apart.

RECOMMENDED: THE THING AROUND YOUR NECK BY NGOZI ADICHIE

Her work has been translated into over thirty languages and has appeared in various publications, including The New Yorker, Granta, The O. Henry Prize Stories, the Financial Times, and Zoetrope. She is the author of the novels Purple Hibiscus, which won the Commonwealth Writers’ Prize and the Hurston/Wright Legacy Award; Half of a Yellow Sun, which won the Orange Prize and was a National Book Critics Circle Award Finalist and a New York TimesNotable Book; and Americanah, which won the National Book Critics Circle Award and was named one of The New York Times Top Ten Best Books of 2013. Ms. Adichie is also the author of the story collection The Thing Around Your Neck.

Ms. Adichie has been invited to speak around the world. Her 2009 TED Talk, The Danger of A Single Story, is now one of the most-viewed TED Talks of all time. Her 2012 talk We Should All Be Feminists has a started a worldwide conversation about feminism, and was published as a book in 2014.

Her most recent book, Dear Ijeawele, or a Feminist Manifesto in Fifteen Suggestions, was published in March 2017.

A recipient of a MacArthur Foundation Fellowship, Ms. Adichie divides her time between the United States and Nigeria.